Time for another week of low carb (last one can be viewed here Week #51), well, again a week late with posting it but Christmas came in the way (or so). So lets start out with something sweet. I have always loved chocolate, used to buy lots of M&M’s. Anyway, since I went on low carb I have more or less stopped with chocolate, to my big surprise this was easier than expected. But I still want some chocolate from time to time. Then I found out that the higher the cacao part of the chocolate was, the lower the carb. YES was my reaction :-) But what I didn’t count on was the calories often goÂ up, like HIGH UP. Anyway, tried some 80% (yammy), then some 92% thatÂ I didn’t like that much, was just too dry. But thenâ€¦ I found 100%.

So ordered 5 of them, together with 5 packages of 80% cacao chocolate. To my surprise 100 grams of this chocolate (one package only got 70 grams) has 638 calories, I mean, HALLO, that is more than a big fat tasty burger :-) but at the same time it only contains 9 grams of carb. Can’t win them all I guess. First time I tasted it I almost spat it out again with the thought: Why didn’t I learn from the 92% one.. Right away told my sister she could have some. Sorry, sister, I’m slowly changing my mind. Taking 1-2 pieces of it at a time is actually pretty good now. No way I could eat a whole package of this one, not like a Ritter Sport :-)

Anyway, this week was not all about chocolate.

Christmas time (yeah, we celebrate on the 24th.. and 25thâ€¦). A day full of snacks, idea was to eat well before going for family dinner so I didn’t spoil myself with high carb food. Well, I failed.

But before i failed I had this new protein bar that I came across recently. Still a bit high in carb with 25 grams for a single bar, but I just love coconut. I remember standing at the fridge and think if I should go for a bounty or this new bar. I went with the new bar, thinking: Oh, it is also coconut, so will be similar. Ah, failed again, total chewy and not sweet at all but still nice.

Yeah, not more about Christmas, but I can say we had nice food all the days and we had plenty. But we didn’t overeat (as Danish people often do at Christmas) but it wasn’t food made with low carb in mind all the time.

So back on low carb diet and starting with omelet for breakfast.

Last time I baked bread it was a nice change and was good bread but the slices were too small for sandwiches. So I gave it another try, with nice success. 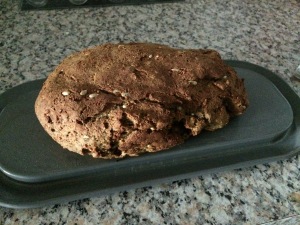 Just have to be careful with the bread and it got lots of calories. Just these 3 slices got 374 calories, so with some cheese and a low carb yogurt my dinner ended on 800 calories and 16 grams of carb. That’s half of my goal of daily calorie intake. Other issue I had with the different bread I have tried is that the bread is always humid, never dries out and therefor isn’t eatable for many days. Quickly get covered with mold :-(

So it happened again, I abandoned the blog :( But good news is that I’m alive. I thought it was time for a short update, so here goes. Not sure when or why it happened that I (again) let go of the blog but it was around the time I realised that I will no […]

Today I did something crazy (for me), I decided to go for a long walk, longer than normally, from home to Basel and back again, ending up with 27.5 km in 5 hours. More than I ever walked in one go. It sure helped that we had a lovely weather today, with 8 to 14 […]

It has not been more than a year since I started to change my life, I’m here thinking about living healthier, change in diet and do more sport. This is a short summary of what happened since then. From 97kg to 85kg My weight spiked to 97 kg in August 2014 and I then decided […]

Back To Top
We use cookies on our website to give you the most relevant experience by remembering your preferences and repeat visits. By clicking “Accept All”, you consent to the use of ALL the cookies. However, you may visit "Cookie Settings" to provide a controlled consent.
Cookie SettingsAccept All
Manage consent

This website uses cookies to improve your experience while you navigate through the website. Out of these, the cookies that are categorized as necessary are stored on your browser as they are essential for the working of basic functionalities of the website. We also use third-party cookies that help us analyze and understand how you use this website. These cookies will be stored in your browser only with your consent. You also have the option to opt-out of these cookies. But opting out of some of these cookies may affect your browsing experience.
Necessary Always Enabled
Necessary cookies are absolutely essential for the website to function properly. These cookies ensure basic functionalities and security features of the website, anonymously.
Functional
Functional cookies help to perform certain functionalities like sharing the content of the website on social media platforms, collect feedbacks, and other third-party features.
Performance
Performance cookies are used to understand and analyze the key performance indexes of the website which helps in delivering a better user experience for the visitors.
Analytics
Analytical cookies are used to understand how visitors interact with the website. These cookies help provide information on metrics the number of visitors, bounce rate, traffic source, etc.
Advertisement
Advertisement cookies are used to provide visitors with relevant ads and marketing campaigns. These cookies track visitors across websites and collect information to provide customized ads.
Others
Other uncategorized cookies are those that are being analyzed and have not been classified into a category as yet.
SAVE & ACCEPT